[b] Farm Machinery Training & Testing Institute; Many letters addressed to locate the same in Tumkuru District.

[a] Development of Medicinal Plant Park at Siddarabetta, Tumakuru  District  Integrated with Ayush College/Universitry-Many letters addressed to GOI in this regard. Another suitable location near Sirsi uttara kannada

3.MINISTRY OF SKILL DEVELOPMENT  UNDER MSME

[a] In view of Mega Solar park at Pavagada , Many letters addressed to the Ministry to establish  National Institute of Solar energy either at Madhugir[Tumkur District]  or at Bellary district  in context of up coming  many Solar parks

[a] Extension of Defense Corridor , which is now up to Hosur[TN] has to be extended to Karnataka state  splitting in to two  one moving towards Tarikere-Bhadravathi-shimoga [to make of use sick Vignan Industires [Tarikere –chikkmaagalur dist and to utilize large vacant parcel lands available at SAIL now sick]]and another Tumkur-Chitradurga-Davanagere-Hubli-Belagaavi  as this location is having ISRO,DRDO,and aerospace park .

6.MINISTRY OF CHEMICALS AND FERTILZER

B] Esatblshment of Pharma park at Bidar,/, Raichur

[b] Funds of Funds for Startups [FFS] to assist Mfg,Agriculture,Health, and education stat ups  -fast track of flow of funds through  SIDBI , as karantaka state of leader in Start ups presence.

[e Establishment of Freight Village at Tumkur industrial node as this identified in the second state implementation.

Much talked proposed Bangalore-Mumbai economic Corridor with multiple Industrial hubs   in the vicinity of the Corridor is proposed in the concept report. In Karnataka it is proposed to have industrial hubs between Chitradurga-Davanagere,Haveri-Hubli, Dharawada-Belagavi  as this corridor passes through these cities.  The Indian government has aimed to generate an investment over ₹300,000 crores (USD 50 billion) from this corridor and expected to create 2.5 million jobs. The British Govt is agreed to undertake a joint feasibility test on the project and detailed Master planning is yet to take shape. Hence I request your kind selves to issue necessary orders to the DIPP, GOI for taking further action. Further Perspective Plan completed by DMICDC, the Nodal Agency. Industrial Node has been identified for master planning.

[a] Establishment of ESDM cluster  in the following districts under project code EMC.2.0

[b] Tumkur industrial Node  identifying SPV of Tumkur industrial node as project implementing agency [PIA} for submission of its proposals , as earlier  approved under EMC1.0 under project code KKI could not take Off .  At least to happen under EMC.2.0

[c] promoting IT parks at Two and Three tier Cities of Karnataka – connect STPI  for establishment of IT parks at Tumkur, CB pur, Ramanagar,Nelamangala, Kanakapur, Kolar, allneigbhourhood towns/cities of IT capital Bangalore

[b] Establishment of Jeans mfg Cluster, at Bellary as this place famous for jeans mfg.

Establishment of Natural  Gas based Power plant at Mangalore, Davanagere,Gadag

To make use of Bio fuel policy 2018& 2019  Setting up of 2G Bio  refineries Facilities  across Karnataka in the rural areas  to help  Village level entrepreneurs, Supply chain Management,  and Farmers to have additional income   by converting wastages, other wise burnt . Connect  GOl’s Viability Gap Fund scheme

Utilizing the Dhabol-Bangalore Gas Work on the City Gas Distribution (CGD) project has already begun in these districts. Petroleum and Natural Gas Regulatory Board (PNGRB), a government of India undertaking, has recently awarded the contract to implement the project in these places, .. The CGD project covers 4,223 sq km in Dharwad, 13,399 sq km in Belagavi and 10,618 sq km in Tumakuru district. CGD will also be implemented in Vijayapura, Davangere, Uttara Kannada and Haveri districts .. GAIL supplies bulk gas from the Dabhol (Maharashtra)-Bidadi gas pipeline for implementing the CGD project in various parts of Karnataka, Piped  natural gas and compressed natural gas  now available in larger areas of  Tumakuru,

Belagavi and Dharwad  cities .  But in Davanagere City  not yet started.

[a]  Request to Set up of Centre of Excellency for development of Technology Development [COE]  at Tumkur Industrial node with participation of Tumkur Machine Tool company ltd [SPV] and  various  prime  Technology education  Institutions . Government of India to Invest Rs 175 Crore for Enhancing the Competitiveness of Indian Capital Goods Sector.

[b]]Construction of Bypass to Tumkur city[Smart City] on the southern side of NH48[0ld NH4]  take off at Km56 point[chikkahalli]  length of  around 42 kms and crossing four lane NH206 at Km 12.300 [Mallasandra] and to terminate at 86.5kmof NH48 near Vasanth narasapura in the state of Karnataka-Suggestions in context of Grand challenge mechanism  guidelines:- requesting the Karnataka State Government .to accord consent for bearing 50% of Land acquisition cost and adopting methodology

[C] Suggestions to GOI ;-priority projects like Ring Roads at least in case of Smart Cities  of Karnataka ie Tumkur, Mangalore,Bangalore. Shimoga,Hubli -Dharwada  Belagaavi  & koppal can be implemented  on fast rack ,[a] treating 50%share component of State as  Loan to the  State Government taking the  consent  of  the GOK. [b] Acquire Extra parcel lands at strategic points along Ring Road enabling to develop as commercial cluster by NHAI to make good of 50% land cost to be borne by the State Govt.[c] As a special case under since ring roads are for smart cities NHAI may be asked  to bear the State Govt share.

This project sanctioned in the Budget 2017-18

Approved 2011-12 Rly Budget,length of the new line project major link line to connect North Karnataka state with the Bangalore through Tumkur,Chitradurga &Davanagere districts.Total cost of the project Rs 1801.01crs. The hon’ble Chief Minister of Karnataka sri B.S.Yadiyurappaji agreed to share 50% cost of the project and for transfer of lands required for the project free of cost, first kind of this initiative across the country during 2010. This project will have impact of development in Tumkur, Chitradurga & Davanagere District largely in addition to entire North Karnatka.

This is socially project desired project. With the Works almost completed under AP Side. Recently lands required for the project transferred to Rlys by the Karnataka state  Govt..Hence  Foundation Laying foundation stone to mark the kick starting the project at Karnataka side project site is requested to enable fast track this project.

The PMO Office Mandated the Railway Ministry for 100% electrification of Tracks spread across the country. In this context, the Central Govt Budget 2017-18 approved un- electrification tracks of

Karnataka State, really good Initiative by the NDA Govt. to cut save fuel bill and in reduction of carbon foot prints.

Further , under  Chikkabanavara-Tumakuru-Arasikere-Hubli Railway Track Electrification project–Under first stage  CORE Rlys  now taking up  Tumkur-Chikkabanavara strectch for execution, which is  about 55Kms in the corridor of Bangalore- Hubli, if it is electrified  ,this stretch will provide Mass Rapid Transits system  facility between Bangalore and its suburb Tumakuru. . Hence Foundation Laying foundation stone to mark the kick starting the project in Bangalore –Hubli corridor.

Approved in 2010-11 Rly Budget estimate cost 986.30 crs rupees, Cost sharing and with commitments of free lands required for project from the state Govt.

;a] Sanction to [a] Tiptur- Dudda by pass line , a port connectivity & brings volume of Goods traffic from Dry Port –Tumakuru. The Survey report is already updated &for this project survey once earlier done in the year 1997. This will enable to give total logistic solution to the up coming at Tumkur NIMZ containing combination of Production units, public Utilities, Logistic Hub with container Roll on –Roll Off model facilities and also volume business through Iron ore shipping from Tumakuru district to NMPT Mangalore… Japanese Industrial Township and Industrial Node under Chennai-Bangalore-chitradurga Industrial corridor is also coming up in the District is added advantage.

Hope I request you kind selves to include Tiptur- Dudda bypass Rly line in the Central Govt Budget for 2021-22 to provide hassle free port connectivity access to the NMPT from proposed Dry port  Tumkur-NIMZ, where Mega Logistic Park is initiated  in the  NIMZ concept  report.

[c]Survey for New line approved  in the last year, In principle sanction  is requird

.[d] In Principal approval to  the Bangalore Region Industrial Rail Corridor [BRIRC] to integrate Multiple Industrial hubs located at periphery of City and neighborhood District. Approval for Survey is requested in the Railway budget 2018-19 Reference  File No,MR/M/161/2016 dated30-12-2016 at Railway Board Office

[e]Provide automatic signaling between Bangalore and Tumkur Rail corridor to optimize use of Track– Bengalore-Tumkur Rail Corridor is one of the busiest stretches in the SWR zone .And further there are strong demands from the people representatives for introduction of new Trains to the state capital Bangalore. Hence “Automatic signaling will become inevitable in future if new trains are to be introduced and also this enable optimum use of Railway tracks. This will also helps   to provide proposed suburban service and run more mail and express trains in the BangaloreTumkur-Hubli-Belgaum Rail corridor.

[g]Execution of Talaguappa-Honnavar new Raliway Line forming joint venture with State to connect Konkan line and to boost hinterland connectivity Karnataka state with Tadadi and Karwar Port hinterland connectivity Karnataka state with Tadadi and Karwar Port-,The  Ministry of Railways has began the process of addressing issues regarding providing  hassle free connectivity to the Ports with hinterland forming joint ventures  with the States and PSU’s. In context of this, the new line project [just 58kms] Talaguppa-Honnavara sanctioned under EBF scheme is vital link and qualifies for making investment, provide a connectivity & also  Backbone link  to the Railways system.

To quote one   project chiplin-Karad 100-km new Line to connect coastal Konkan region and Karad -Western Maharashtra is being executing on public–private partnership basis which was conceived jointly by Railway Ministry and Maharashtra Government .  MoU in this regard was signed recently, as per agreement  a pvt firm Shapoorji Pallonji Corporation Pvt Ltd (SPCPL) will partner with Konkan Railway to execute the PPP venture,

which will be completed in five years with an estimated cost of Rs 3195.60 crore.. Konkan Railway will have 26 per cent equity in the special purpose vehicle (SPV) implementing the project, while Shapoorji Pallonji hold the remaining 74 per cent.

In the similar manner, request to push the much important railway project Honnavar-Talaguppa new Railway project identifying under PPP model with understanding with the Karnataka state Government .This will be much value Railway projects as it provides through connectivity to the Tadadi port and Karwar Port from the hinterland of Malnad and Central Karnataka where twin Industrial corridors one Chennai-Bangalore-Chitradurga Industrial corridor,  another is  Bangalore- Mumbai Economic  corridor is happening.

Pushing   this  project under joint venture model creating SPV,  with GOK on board enabling very important  railway project   which will give economic boost to the hinterlands like Shimoga , Karwar,amd Central Karnataka areas.

[1]All India Institute of Medical Science institution to Tumkur

In context of above, that the City Tumakuru is one among smart cities notified by the Govt of India. One of the main social obligations under Smart city concept is providing smart and ensuring health to all citizens in the city. Further Tumakuru being an edge city to Bengaluru is going to be Up coming Mega Industrial city and also called Education Institutions Hub.  Give Push to sanction All India Institute of Medical Science institution to Tumkur from the GOK side . 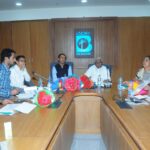 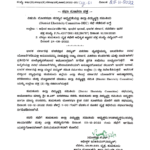